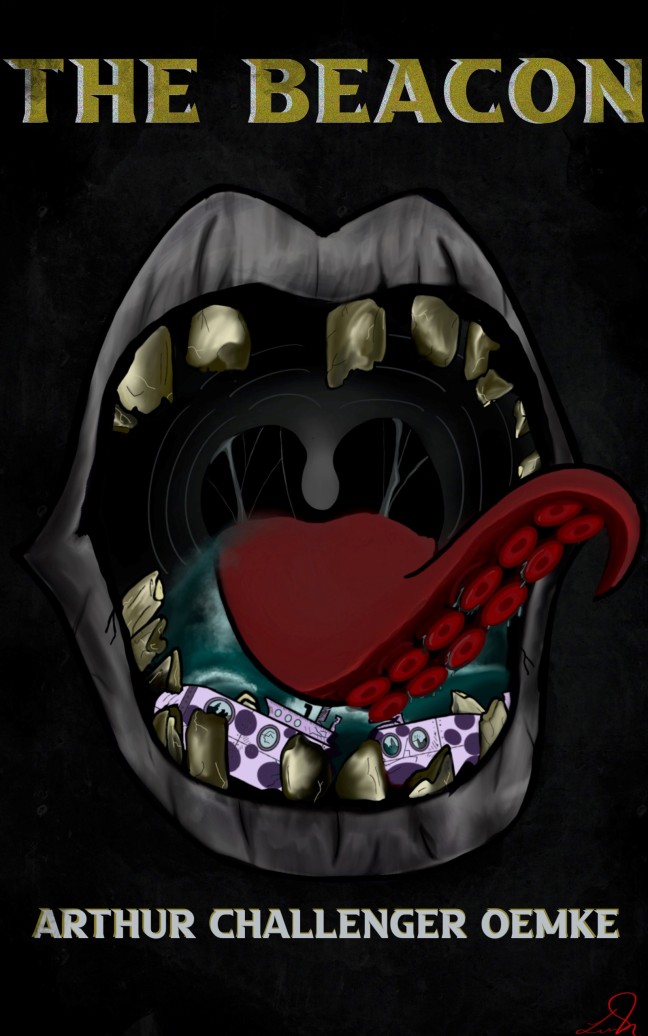 It is with great pleasure and zero ounces of pride, that I’m announcing the release of The Beacon. This is included as a free download from this site, or if you want you can go buy it off of Amazon to read on yr kindle. Whichever works for you. What is The Beacon and what is it about? Let me attempt to summarize.

Occasionally things that are close and familiar can grow grotesque with time and shifts of perception. The original intent of a product grows distorted the further the origins of the product exceed the present moment. When we examine the toys of yesterday or read the works of authors long dead we interpret and experience these products through our current cultural sensitivities and expectations. The Beacon is an attempt to forecast the perceptions and interpretations of long-dead intellectual property. What was once a cultural phenomenon is subsumed by the characters unique views and present circumstances.

The plot is irrelevant. The language is obtuse. As a written work it is opaque.

It’s currently “under review” by Amazon. So that’s exciting. Once it’s live on there I’ll include a link and a way to DL it for free, cuz I mean really?

Polly shakes her head at the taxis occasionally slowing by to entice. Frustrated honks glide off into the rain. She strides past derelicts, street heavies, and closes her eyes tight against the wall of graffiti that hems in San Pedro.

Fibrous cylinders fountain like fast forward spaghetti from a prehistoric non-vascular aquatic life form that resembles a toilet paper roll. The cylinders collide mid hologram with a trophy touting lion’s head sewn to the prehensile breasts of a mother kangaroo in whose pouch a tangled mess of electric wires squirm and sizzle. Their googly eyes flying out over the street in clumps of four. Behind the Kangaroo a long vanishing point type rainbow stretches back to the primordial past where giant sloths feed Jesus goldfish crackers. A sagebrush jack rabbit, cartoonish and cute, supports a pack of boner pills that dance along the animal’s tongue. Balloon letters bleed from the rabbit’s asshole, “Best of Luck!” As the sea spaghetti wriggles ever up the walls of San Pedro they encounter the level wherein no birds dwell. Figures of aged folk, in an early Raphaelite style swoon over benches their outstretched dying palms filled with dripping bird seed. Crows knacker silently and gurgle down the seed which wriggles in their distended bellies. Though the horizon of the San Pedro walls imposes a creative restraint on the gang of artists responsible for the duelling graffiti, each has interpreted that final moment uniquely.

From the East, the wire joeys braid together as nautical vessels of war, gliding through a mine rigged dark up towards the surface. Torpedoes launch from tubes and spring forth hyperbolic flower arrangements of surveillance clouding chaff clusters. Their broad hulls brush spiralling crustaceans and squid aside as they move upwards towards the white-capped limit of this space.

From the West, a bounty of grotesque deformities, long-limbed torsos astride abominable sets of twelve legs with each ending in a cracked yolk wherein curdled foetuses blow bubbles in the first and last breaths. Test tubes crack open upon smoking wounds in disembodied arms. Ink spills from a sodden cloud at the upper limit. It rains down from above and as the drops fall they transform into a series of political caricatures of the hated politicians of the day. The multi-limbed beings spread out in the rain, some bask and others shelter under one another with the occasional hands wriggling digits at the submarines rising above.